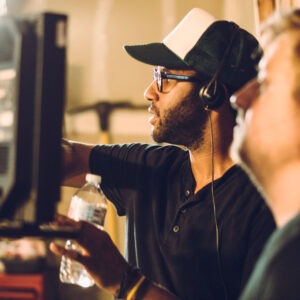 Theo Brown is a LA-based director with a passion for highlighting intimate character stories that feature diversity in front of and behind the camera.

He recently directed Smokey Mountain Rescue, a collaboration with the North American Division, accomplishing a Silver Telly Award (and the honor of placing second to Sesame Street). Other content that has been created for Amazon, NASA, NBC, and others have been warmly reviewed.

Theo is extraordinarily grateful to be a part of the Mt. Rubidoux SDA Church Media Team, where he operates as the in-house filmmaker and website manager. From creating music videos, documentaries, and more, he’s especially excited about Reach Inland, a monthly show that highlights minority business owners in the Inland Empire community.

God has opened opportunities for Theo to tell stories, connect with people, and learn about this incredible world of ours. He graduated from Southern Adventist University in 2010, studying Film Production (B.S.).

Creating intentional and authentic content for any sized church is a big task! For this discussion, we’ll go talk about how branding, websites, videos, and other creative materials can express your church’s story without a single written word… and how you can build a team to help your church succeed.